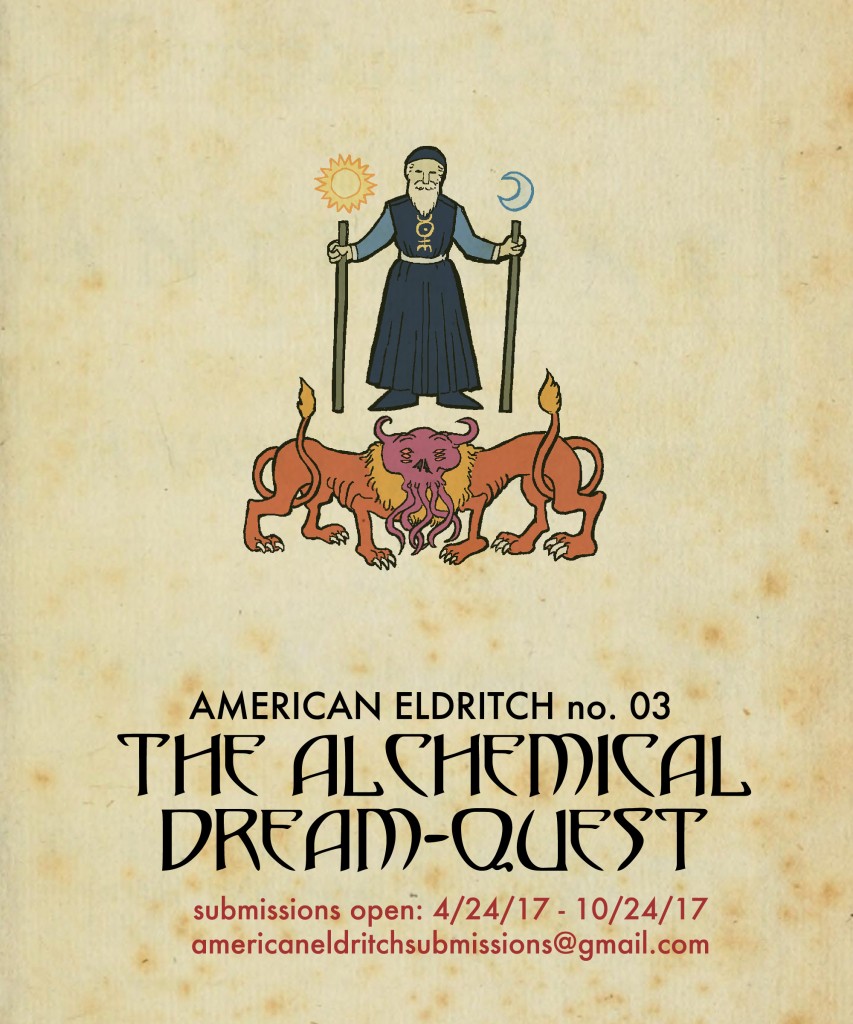 Submissions for our annual journal of Weird art and literature are now open. Our theme is inspired by the two opposing cosmologies of HP Lovecraft and Terrence McKenna; The Dream-Quest of Unknown Kadath meets The Alchemical Dream.

Check out the submission page for more information.

Challenging the general consensus that all giants are brutish, irredeemable rascals, Eunice Barnard Fuller’s The book of Friendly Giants (1914) mines folklore and ancient mythology as inspiration for tales of benevolent giants – although, she sometimes rewrites the pagan or otherwise esoteric source material in order to pursue her gentle agenda. Nonetheless, it’s a well curated tour of the mythology of giants; age-old Chinese, Norse, Celtic, and Native American stories are incorporated among more recent giant literature, such as  “Gargantua and Pantagruel,”, a 16th century pentology of novels, or the 1887 book Three Good Giants, which introduces the primordial Chalbroth and his grandson Hurtali to the canon. The Friendly Giants stories culminate in a final, original chapter titled “The Giant Who Came Back,” set in 20th century New York City. It’s a nostalgic tale featuring the behemoth Benevaldo, who discovers that his people can no longer be seen by the humans that don’t believe in him. 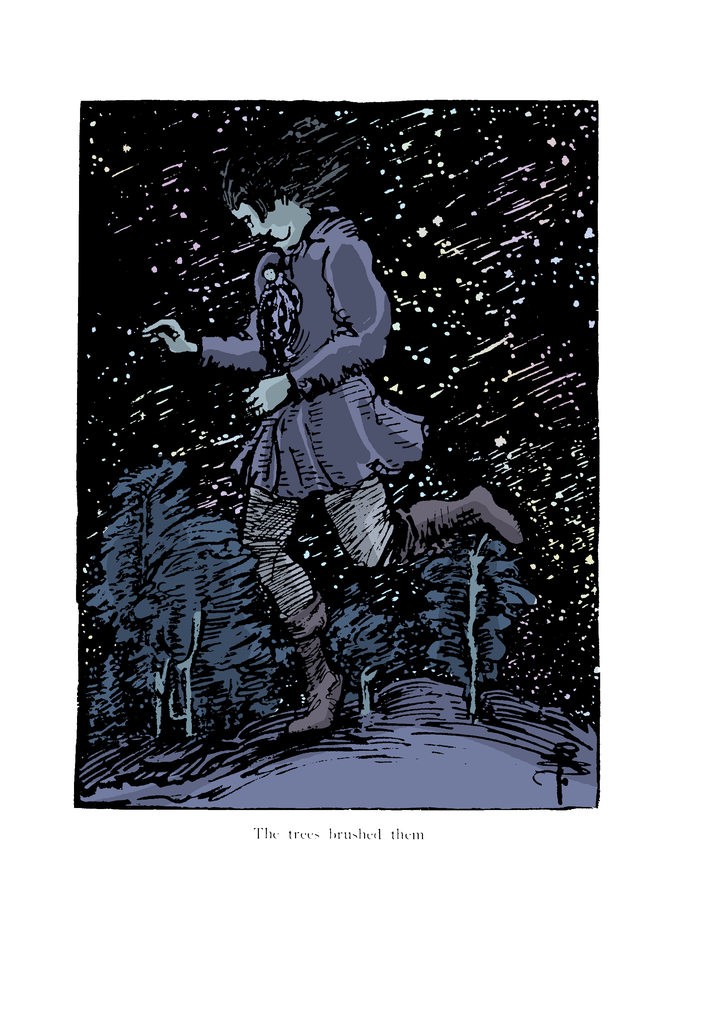 Each chapter is accompanied by a different introductory poem by Seymour Barnard, Fuller’s husband. I don’t care for his verses, and I’m glad he’s dead.

Bringing the text to vision, the infamous Pamela Coleman Smith (illustrator of the Rider-Waite tarot) provides what might be her final contribution to children’s literature (previous works of hers include The Russian Ballet, In Chimney Corners, and Annancy Stories). The illustrations fluctuate between simple cartoon art and fully painted scenes of fantasy and spectacle; her line-work is thick and rough, which especially serves the darker, more contemplative moments throughout.

Illustration by Pamela Colman Smith for the Book of Friendly Giants, 1914.

While Smith is fairly well known, I was discouraged, upon examination, to discover that biographical information about Eunice Fuller is scant. I was curious what these two women had in common, and if Fuller shared Smith’s background in the occult order of the Golden Dawn, or any associations with A.E. Waite and his crowd. As it turns out, Fuller seems to have been a pretty dedicated Christian protestant (at least in her youth), and at the time of their collaboration, Pamela Coleman Smith had abandoned her hermetic interests and committed herself to Catholicism in 1911.

In continuing to research Eunice, however, I was encouraged to discover that she grew up in Lovecraft’s Providence, around four years his elder, a mere fifteen minute walk from Howard’s house on Angell st.

Eunice Fuller lived at 170 Prospect st, in Providence, Rhode Island (picture above, in 2015). She was born ~1886. From a young age, she proved herself to be a talented writer; records of her achievements can be found in volume 96 of the Missionary Herald in 1900, where Eunice was awarded second place in a Missionary Essay Contest for young writers, earning her $10. Regarding the contest, the Herald muses:

In 1903, Eunice took first prize in a fiction contest in St. Nicholas Illustrated, volume 31. $5 prize, and they published her full story. Later that year, her name appeared in Love and Life for Women, another missionary publication, as a record of Eunice’s junior auxiliary membership into their society.

In High School, Eunice was a member of the Upsilon Sigma Society, a theatre group that produced several original farces. Eunice played Jonas Chorker (the gardener) in “My Cousin Timmy” (1903), and she played Dandelion in the Clancy Kids (1904).

In 1907, after she’d graduated, Upsilon Sigma produced an original farce by Eunice and Margaret Courrier Lyon titled “A Visit from Obediah: A Farce in Two Acts (For Female Characters Only)”. Three other Fullers are listed as actors, and I am presuming they are Eunice’s sisters and brother.

Eunice attended Smith College, and received a BA in 1908. She was a member of the Phi Beta Kappa Society, and served as editor for the Phi Kappa Psi Society. She was a senior member of the Philosophical Society, and during her final semester, served as the President of the German Club (Der Deutsche Verein). Her 1908 yearbook is here, and includes the only picture of her I was able to find. 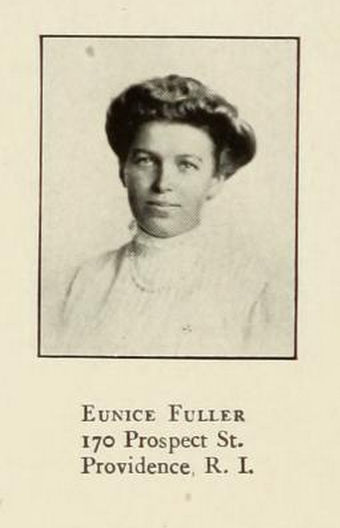 After graduating college, Eunice married Seymour Barnard, and worked primarily as a journalist, and an author of non-fiction. She wrote about American history, culture, economics, and women’s issues during the great depression. Her work appeared in Scribner’s, the New York Times Magazine, the North American Review, and more. Seymour, meanwhile, was published a couple times in the New Yorker, and he was fortunate enough to have one of his insipid poems illustrated by the illustrious Richard Scarry for Women’s Day.

The Book of Friendly Giants was published in 1914, to favorable reviews from various literary magazines; The Bookseller (vol 41) calls the volume a ‘new idea,’ whose ‘manner of telling is delightful,’ and praised Smith’s illustrations as ‘queer, funny and fanciful as one has a right to expect’. St. Nicholas published one of the 12 stories, with Coleman’s illustrations accompanying, and also a review that begins:

“Who isn’t interested in giants? But most giants are a bad lot, and the business in hand is how to kill them off without getting hurt yourself.  But here in this book, the giants are quite a new sort…”

In the Worthwhile Reading section of the Independent (vol 80), a reviewer suggests that “After reading the book, the nursery will have to revise opinion regarding the viciousness of giants.” They did indeed; The Kindergarten-Primary Magazine reviewed the work, and called it “An excellent idea… a book the children will rejoice in.” 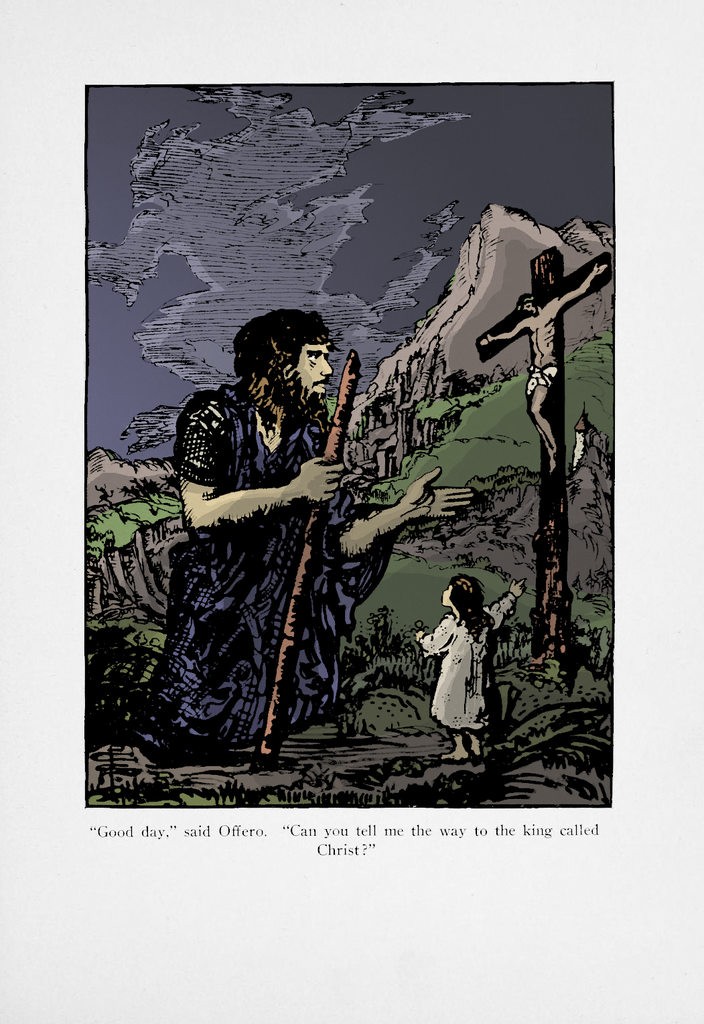 In the spring of 1929, Eunice opened a brokerage house just for women. I’m not sure how well that worked out for her out in the end, considering the timing, but it was a noble effort.

“So WALL STREET has come to Fifth Avenue. Silently one by one among the smart specialty shops of the Forties and Fifties appear the brokers’ signs. With the arts of the drawing room, stock market operators for the first time in history are actually bidding for feminine favor. And woman is at last being made free of those more or less green pastures where men long have dallied.” – Eunice Fuller Barnard, “Ladies of the Ticker,” North American Review, 1929

Ultimately, most of Fuller’s life and times are lost to the immemorial past; most of her imprint exists in her journalistic endeavors, which have been widely cited over a century of research and academic endeavors. At the very least, Fuller left behind enough evidence behind to prove that her obscurity is a disservice to our American heritage. 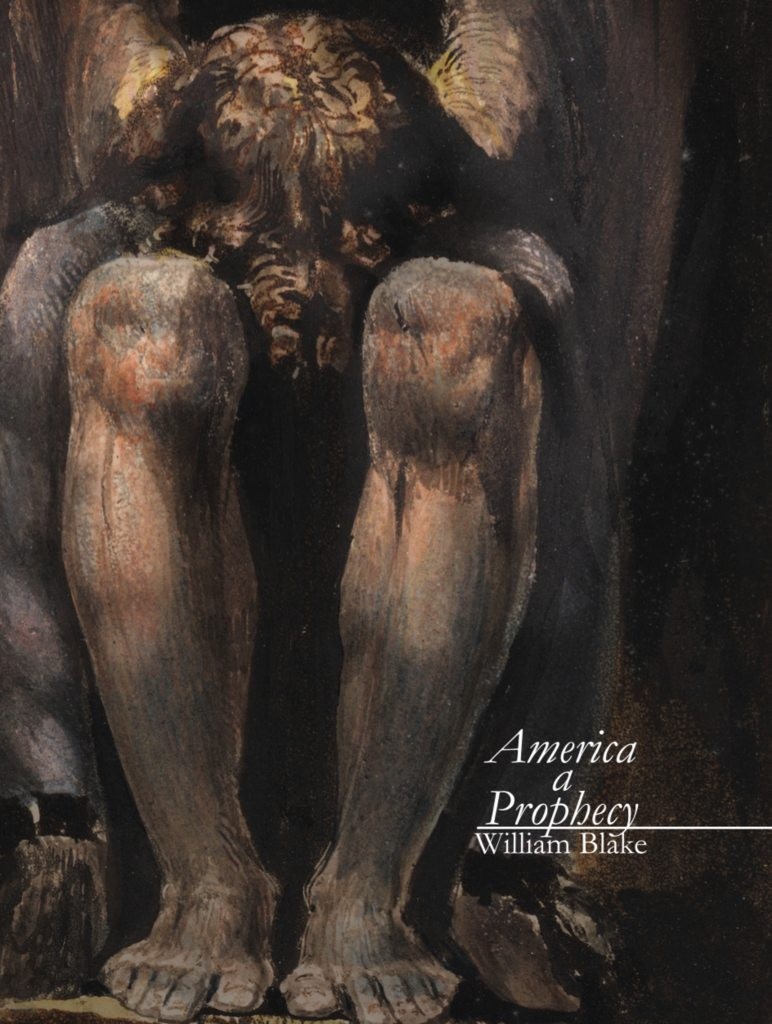 New from AMERICAN ELdRITCH: high-quality facsimile editions of two of William Blake’s continental prophecies. America a Prophecy (1793) features an introduction by Aladdin Collar, and Europe a Prophecy (1794) features an introduction by William Butler Yeats. Both volumes of premium cosmic horror are published in full color, and contain supplemental plain-text versions of the poems, as well as a diagrammatic interpretation of the cosmology.

Blake’s system repurposes gnostic philosophy, Quabbalic mysticism, and greco-roman/pagan tradition with an almost wholly new order of celestial deities. The poet himself seems to have lived a persistently visionary existence; he explained his writing process as taking dictation from spirits. As WB Yeats describes him, “He saw in every issue the whole contest of light and darkness, and found no peace. To him, the universe seemed filled with an intense excitement, at once infinitesimal and and infinite, for in every grass blade, in every atom of dust, Los, the ‘eternal mind’, warred upon the dragon Urizen, ‘the God of this world.’” – Aladdin Collar, from the Introduction to America a Prophecy 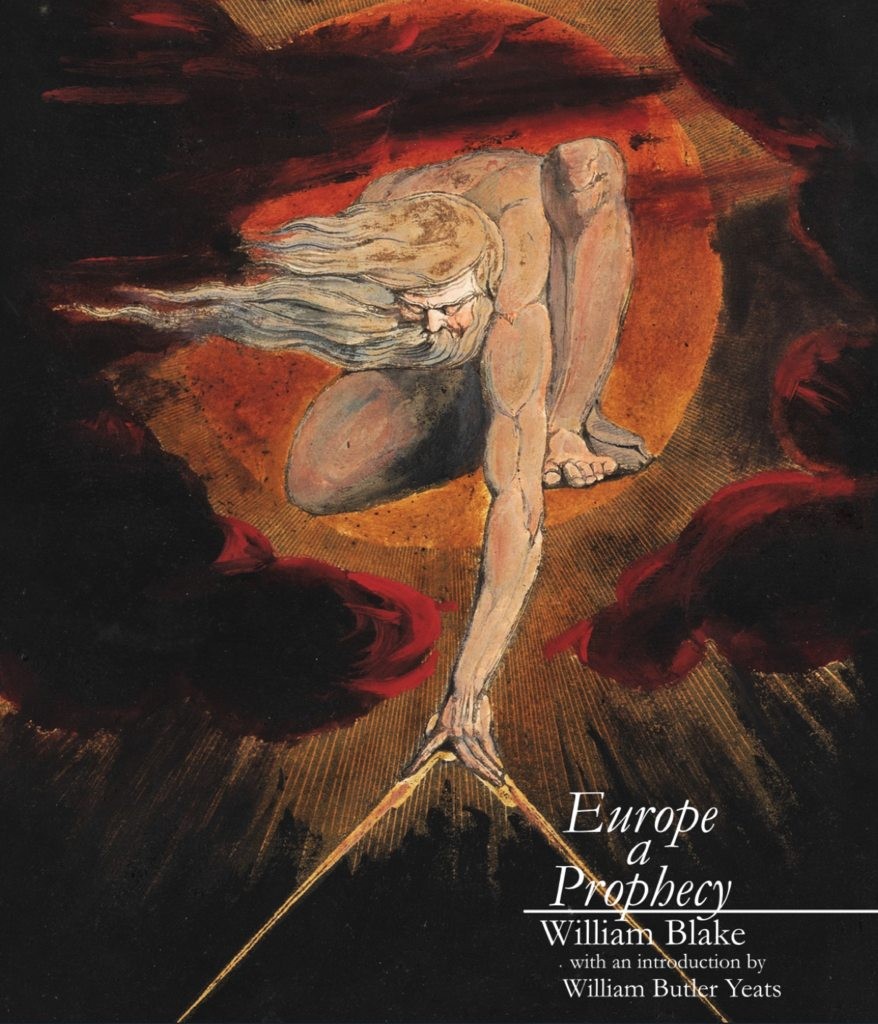 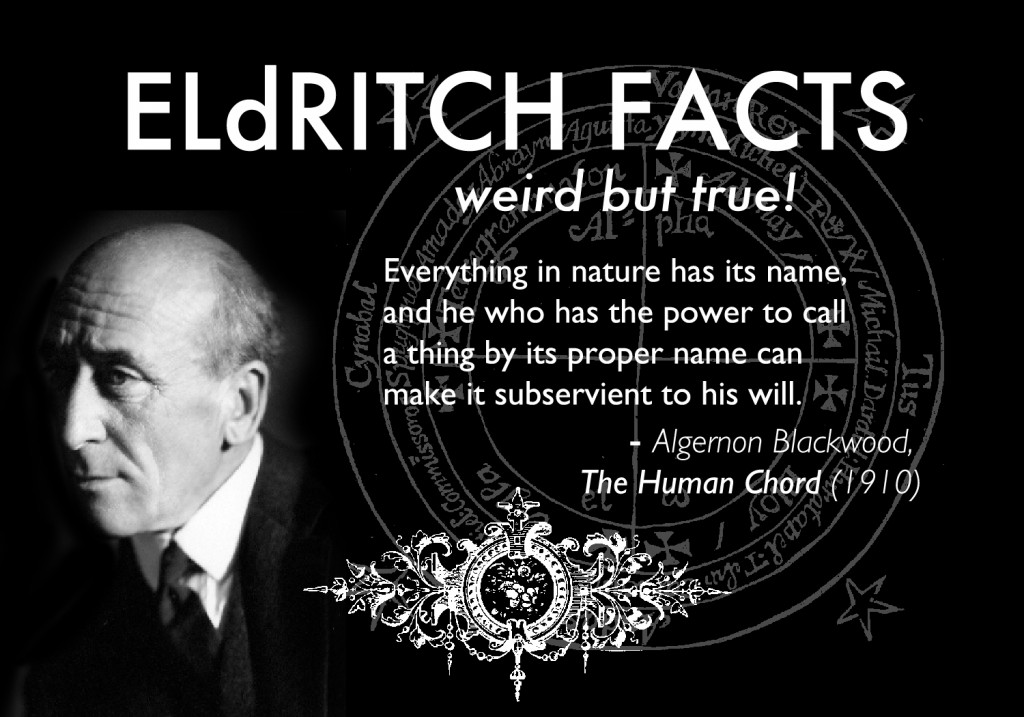 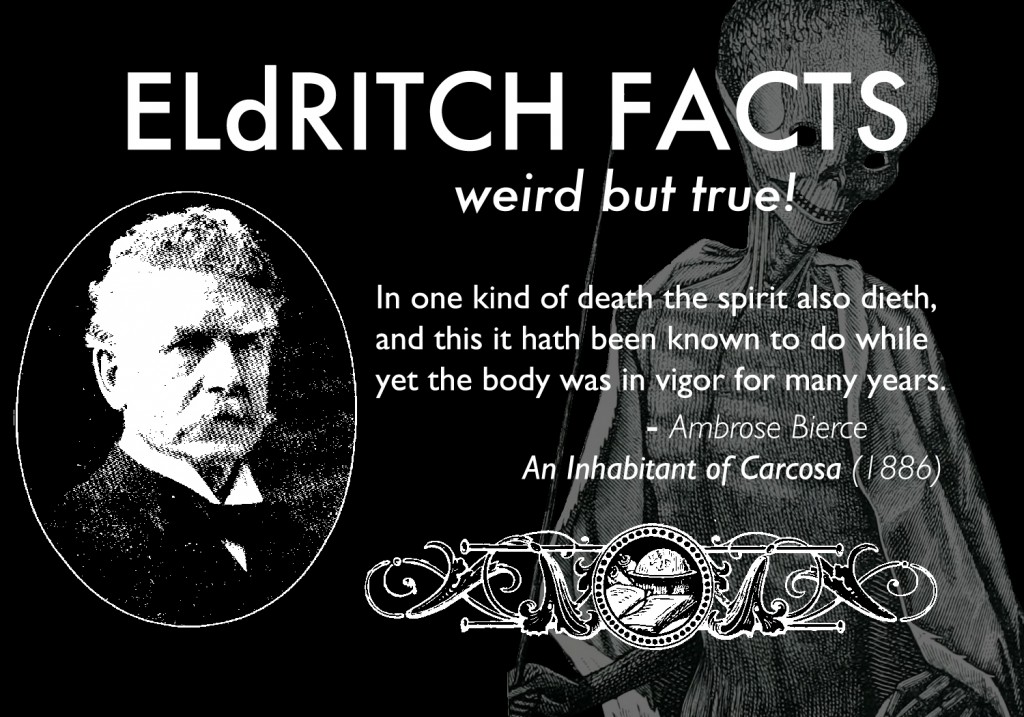 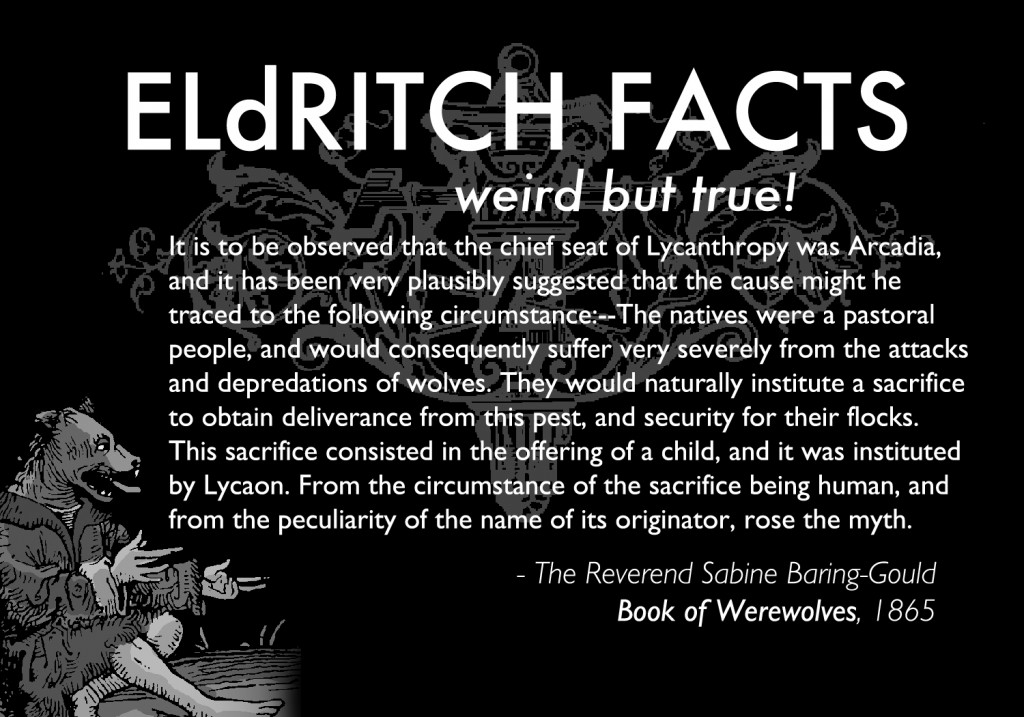 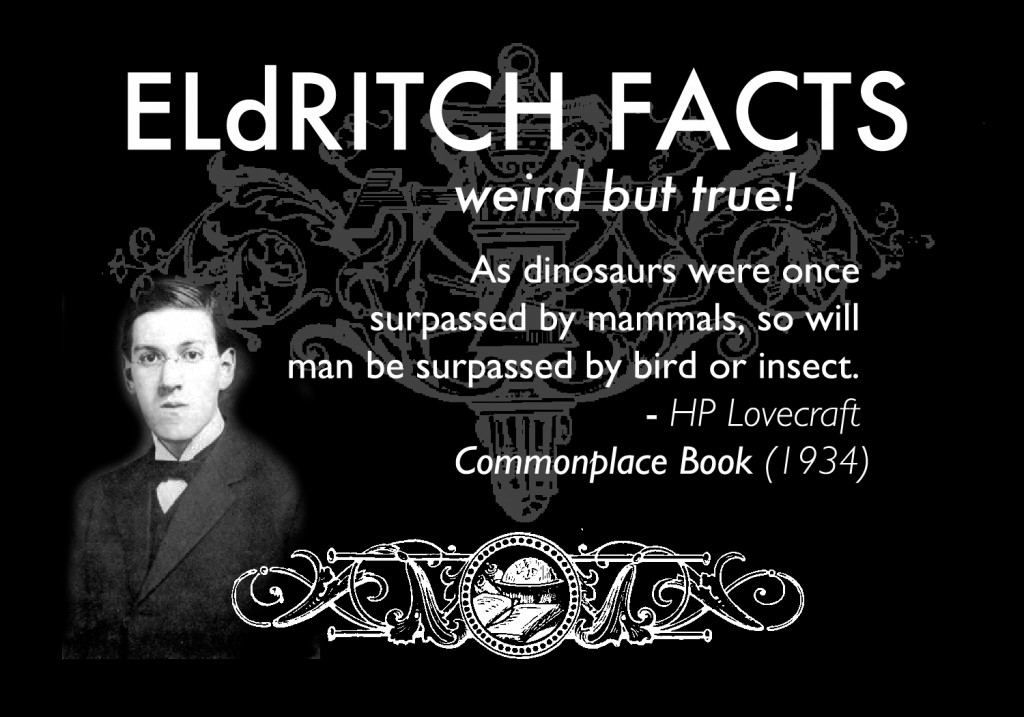 Wow, I bet you learned something today! This is the stuff they won’t teach you in school. Please share with your friends and loved ones, preferably in a forwarded chain email with grainy, low res images and two watermarks from different facebook groups.

One of three master engravings by Albecht Durer, The Knight, the Devil and Death (1514) depicts a complicated romance of intrigue and mystery. Just a glance at the posturing and expression of the characters allows for an easy reading of this deeply symbolic work of art. 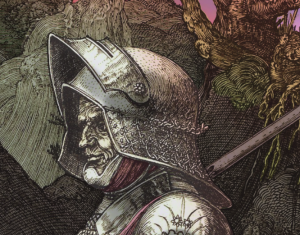 The Knight, poised with his spear, looks not upon the Devil or Death, for he is in love with both, and he doesn’t want either of them to figure out that they’re being played. 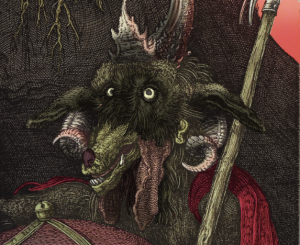 If you look closely upon the face of the Devil, however, he does know about the Knight’s infidelity… he just doesn’t care. He phallic imagery bends and twists in all directions; he’ll stick it anywhere. Have some self respect, Devil. 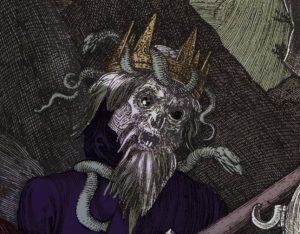 Death, meanwhile, glowers naively at viewer; his pleading eyes ask all the questions. Why isn’t he looking at me? Death wonders. Doesn’t he love me anymore? Am I getting too old? One of Death’s hair snakes looks towards the knight, longingly; the other gazes away, unable to deal with the situation. 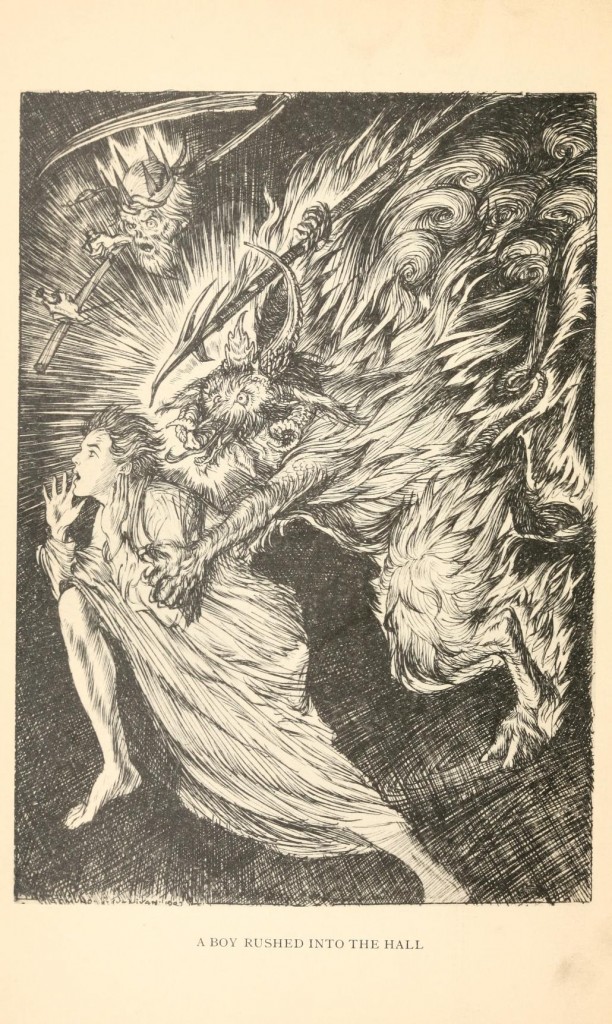 Illustration by Edmund Sullivan, for AC Farquharson’s translation of Lamotte Fouque’s “Sintram and his Companions” (1908).

Durer’s image inspired countless works of art and literature, and his depiction of the devil became a common representation of the beast. It was in the novel “Sintram and his Companions,” (1908) however, that Durer’s imagery was really explored to its full potential. The book features the characters of Sintram the Knight, Death and the Devil in sexually charged romp, with undertones that range from “subtle” to “naked dudes stabbing each other.” The frontispiece of the book (below) itself is Durer’s original print. 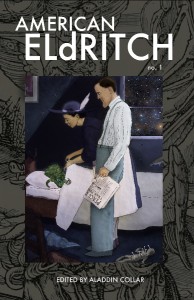 Celebrate liberation from monarchy and the blood of our masters by purchasing a copy of American Eldritch, a new journal featuring weird art and literature. Issue number one includes fiction and essays by HP Lovecraft, R. Wess, Mac Smullen, Ambrose Bierce, and many more, as well as visual artists including but not limited to Jen Plaskowitz, D. Edward Calhoun, Alex Cobble, and Rosemary Liss.

$10.00, 150 pages. Published by the American Eldritch Society for the Preservation of Hearsay and Rumor. Preorder your copies NOW by putting 10.00 in a bank account and setting a timer for July 4th at midnight and then ordering it on amazon when they’re available. 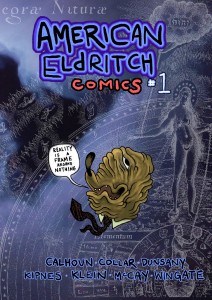 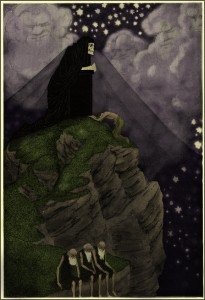 How Shaun Found the Ultimate God, by Sidney Sime. Illustrated for the story “The Sorrow of Search,” by Lord Dunsany, from Time and the Gods (1906). 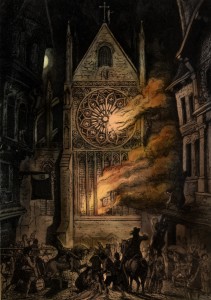 The Burning of Old St. Paul’s, by John Franklin, from William Henry Ainsworth’s Old St. Pauls: A Tale of the Fire and the Plague.

Fame singing in the highways, and trifling as she sang, with sordid adventurers, passed the poet by.

And still the poet made for her little chaplets of song, to deck her forehead in the courts of Time: and still she wore instead the worthless garlands, that boisterous citizens flung to her in the ways, made out of perishable things.

And after a while whenever these garlands died the poet came to her with his chaplets of song; and still she laughed at him and wore the worthless wreaths, though they always died at evening.

And one day in his bitterness the poet rebuked her, and said to her: “Lovely Fame, even in the highways and the byways you have not foreborne to laugh and shout and jest with worthless men, and I have toiled for you and dreamed of you and you mock me and pass me by.”

And Fame turned her back on him and walked away, but in departing she looked over her shoulder and smiled at him as she had not smiled before, and, almost speaking in a whisper, said:

“I will meet you in the graveyard at the back of the Workhouse in a hundred years.”